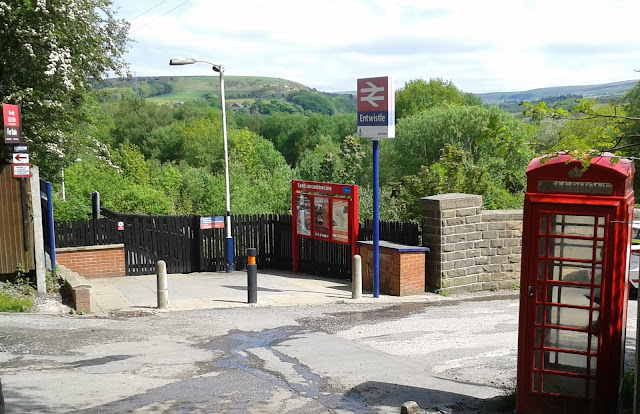 A fabulous walk and picnic in Lancashire yesterday, around Entwistle reservoir. Photos of that another day but this is the quaint station approach. Just 45 minutes away from Manchester, above Bolton, an easy enough commute if you fancied living out in the lush green hills.  One for Our World Tuesday. 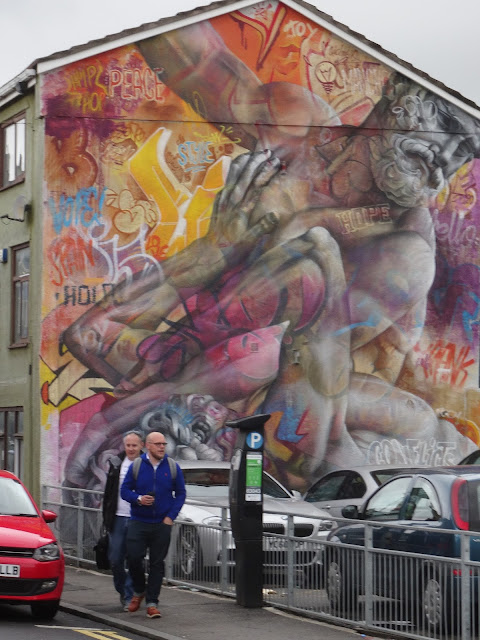 Another one of the many new murals being created at Cities of Hope street art festival in Manchester this past week. Mural lovers, do check out my past week's posts for more. A Monday Mural. 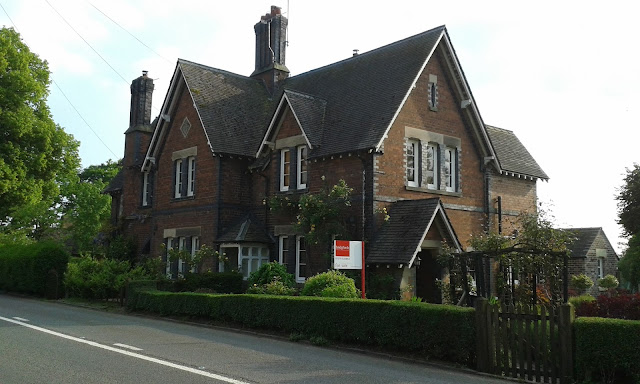 
It’s been a fast and furious, fun and emotional, inspiring and promising start to the bank holiday weekend. I left work in Manchester early on Friday afternoon to get to the far flung suburbs of west London, for a BBC reunion. Amazing that I hadn’t seen most of the people there since George Orwell's infamous year, an eon ago. A 1984 BBC promo video of where we worked in Equipment Dept is here.

What lovely warm people they (moi aussi!) all grew into to. We were all so young back then, finding ourselves, a bundle of hormones and angst, failed by the education system and thrown into dead end jobs at 16-18. But we all seem to have found happiness and success in our own ways.

Saturday morning it was a dash across London to Rise at Bethnal Green for the inspiring Dangerous Times Festival. Great speaker such as Tariq Ali, Lyndsey German. Natalie Bennett, Clare Solomon and Kate Hudson, debating many topics, from Lexit to Trident, unions to reclaiming the media.

Had to leave early to head homewards, well to Betley village in Cheshire in fact, where it was a dear colleague’s 50th.

Late train from Crewe to Manchester and happily in bed by midnight with a glow of amazing memories of past, present and future people and politics buzzing in my head.

Plenty on the cards for today - off to the Peaks for a walk, but started with breakfast on the balcony and writing this- enjoy the sunshine my Mancunian friends and honorary Mancunian readers! 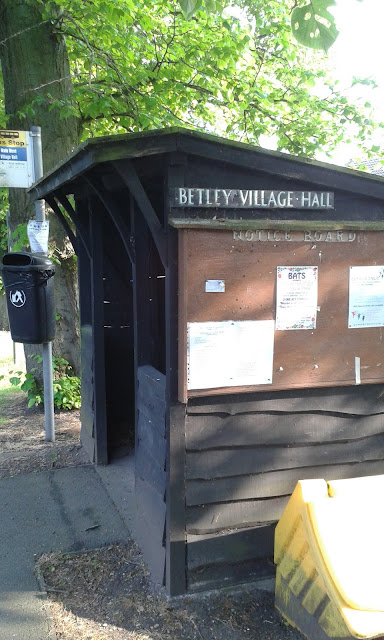 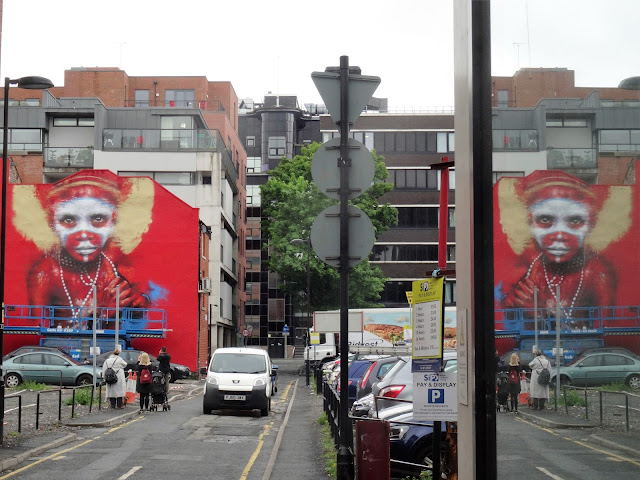 I posted this work in progress on Tuesday and here is an update of Dale Grimshaw's mural, taken Thursday lunchtime for Weekend Reflections. 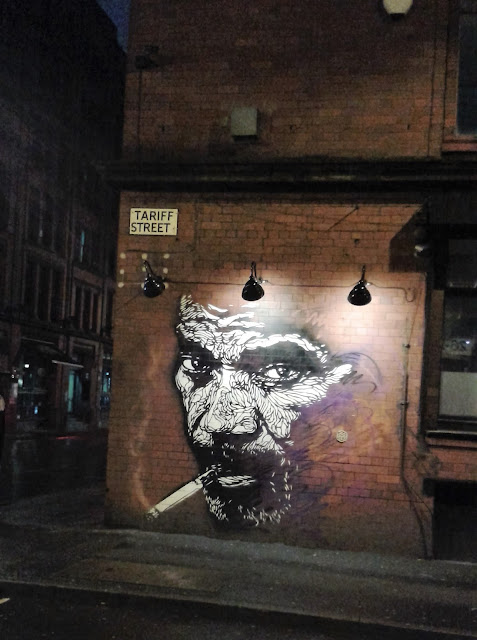 The Cities of Hope festival this week is attracting much attention. Street art is an empowering act of protest and awareness raising.   Each of the international artists working in Manchester this week is driven by different social issues demanding our (the people - and the government)  immediate action and input; environment, homelessness, gay rights, sustainability and more.

It's arranged by Vestige, a not for profit social justice organisation, that uses the Arts to inspire action on the social issues that define our time and support the work of agencies that champion these.

“From its beginning, Street Art has championed the oppressed, standing defiant in the face of injustice as the voice of the powerless. Street Artists are beacons of hope, champions of the struggles that many would rather ignore.” Cities of Hope 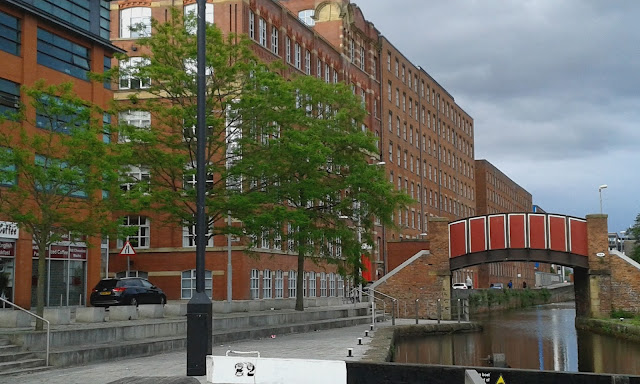 While wandering around Ancoats admiring the Cities of Hope street art on Monday night, I was moved by this scene on Red Mill Street. Lock 82 providing a gateway onto industrial heritage and the bright green hope of late spring. The slate grey sky adds to the contrast. Skywatch Friday.

#CitiesofHope #StreetArt on Port Street, a work in progress 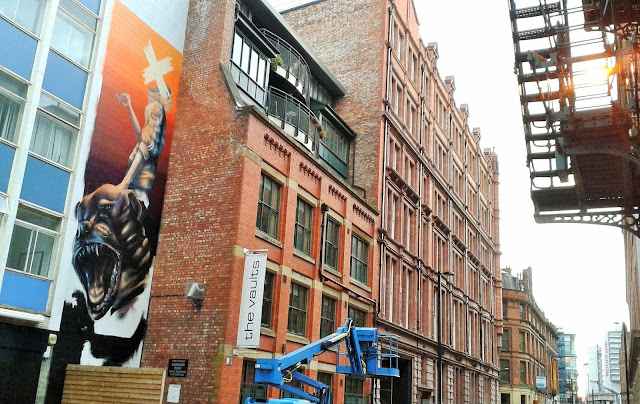 After a fascinating wander last night through the Ancoats and NQ streets identifying new street art that was part of the Cities of Hope events, and old, we retired to the lovely Whisky Jar on Tariff Street. More on that another time but its craft beers and 250 whiskies, plus decanter lampshades , comfy old sofas and a wonderful playlist made it a home from home.

I’ll be checking progress on all the street art this evening too. This was on Port Street as the last rays of sun sank in the west.

Joining in with the Monday Mural even though it’s Tuesday. 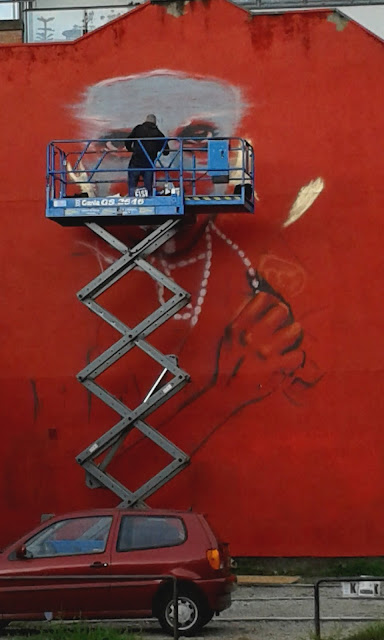 Monday evenings in the western world don’t have to be ones of drudgery and domesticity. We were off for a self guided tour of Ancoats and the Northern Quarter to track down street artists taking part on the current Cities of Hope street art event taking place in Manchester.

International street artists, lectures talks and discussions all week. Creative and empowering, watch this mural evolve as Dale Grimshaw from Accrington transforms the space on Spear Street. I’ll be posting before and after pics here all week so keep tuned in.

May Feast and Flower market 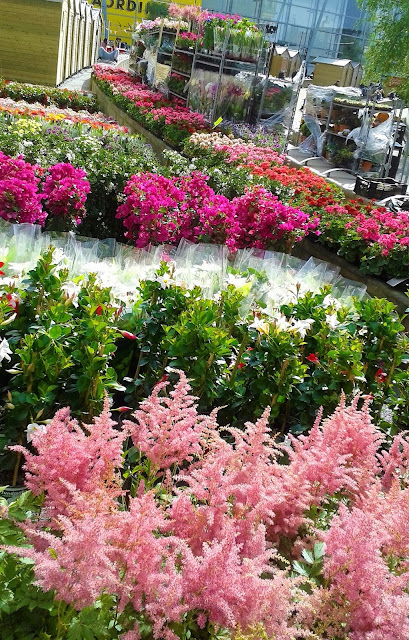 The May Feast and Flower market in Exchange Square brings some nice bursts of colour, plus a refreshment tent, Prosecco van and a few food stalls. It's all rather small -  but friendly. 20-30 May. 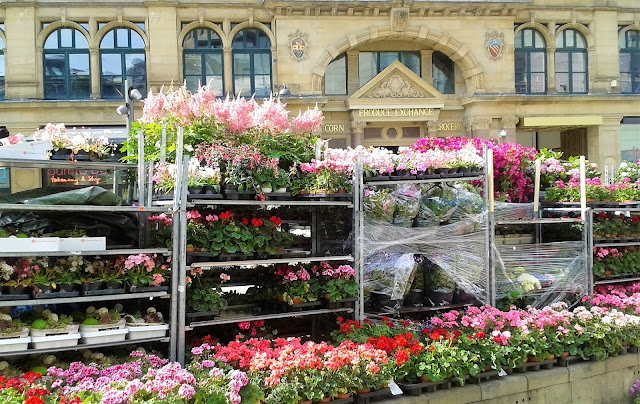 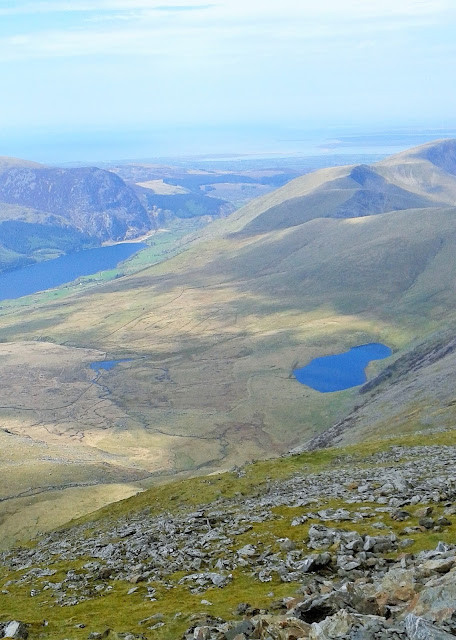 Two Sundays ago we headed off at 7 a.m. from Manchester city centre along the A55 North Wales coastal road. Two hours later were at the foot of Mount Snowdon, tallest mountain in Wales (and taller than anything in its eastern neighbour of England too). 1,085 metres (3,560 ft).

After the unexpected rain dissipated we started our attempt on summit. Up the Llanberis path along with dozens of others of all ages and shapes, children and dogs, the fit and the less fit.

It was an amazing three hour walk to the top, with natural view points along the way and every time you turned around you would be taken aback by the distance and beauty. Incredible views westwards along the Llyn Peninsular and southward along the west coast. After a break in the café at the top we came down via one of the other paths- the miners’ track.

It felt like you were up in the sky at times so I felt this would make a good post for Skywatch Friday. 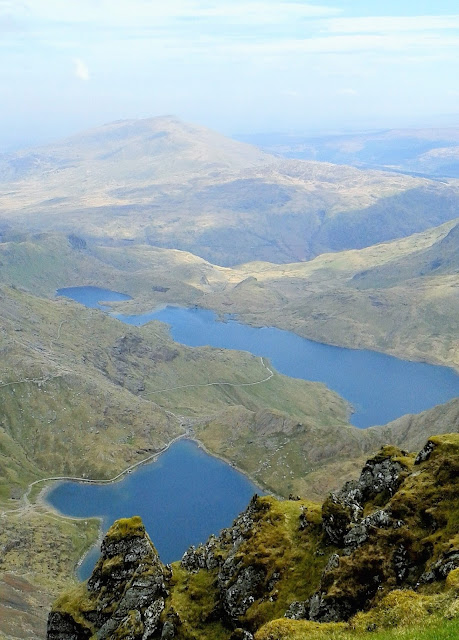 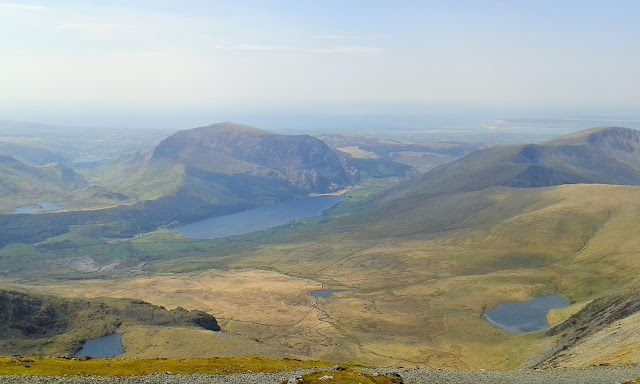 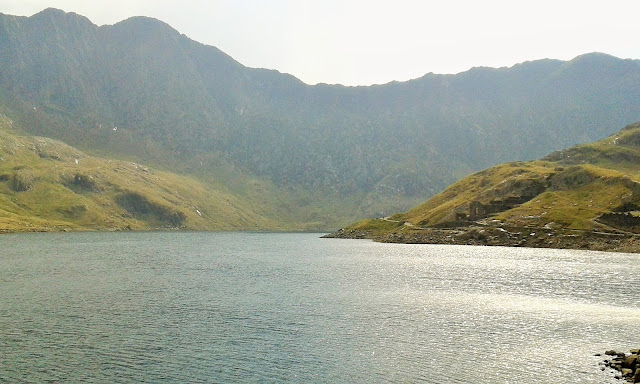 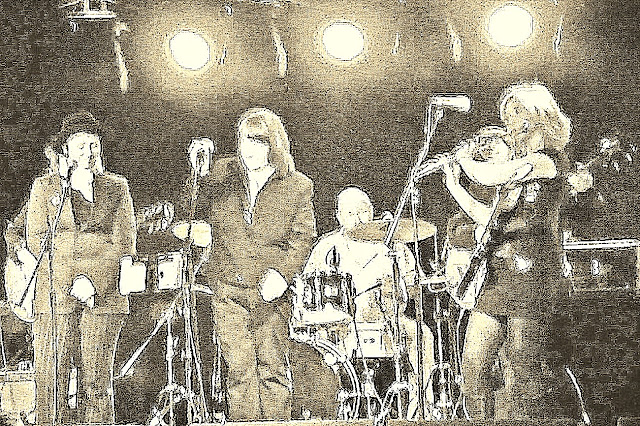 I was aiming for a vintage 1966 scrappy, almost watercolour post-effect for this photo of Poppycock. A sense of the mood that Tuesday night conveyed to me, of history and heritage, of wistfulness and excitement, more than trying to take a perfect close up concert photo- I’ll leave that to the experts with front row access and expensive cameras!

Wow, Tuesday was 50 years ago to the day, 17 May 1966, that Bob Dylan played Manchester Free Trade Hall in what become known as the Judasgig. First half of acoustic songs went swimmingly then unhappiness among the 2,000 audience when the second half of electric songs were played. Someone shouted Judas, the rest is history

Manchester District Music Archive (MDMA) recreated the entire set at Academy 3 last night with a different act performing each song. All introduced by the legendary north westerners that are Andy Kershaw and CP Lee, it was marvellous to hear so many reinterpretations of the Dylan songs, as well as to hear snippets of history form documentaries the two made about the gig in 1999 when the bootleg versions of the concert was finally released officially. The final number was a case of as many on stage as possible to sing Like a Rolling Stone. I really enjoyed the gig and was impressed there were a few veterans there who were also at the original gig. Mymuso mate Dave was at the original one but not Tuesday night’s. 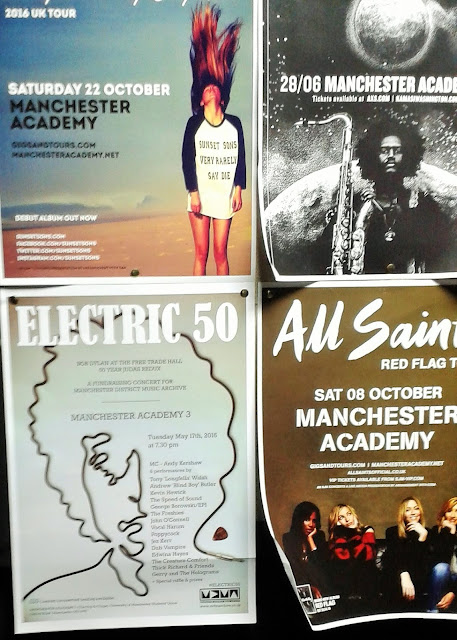 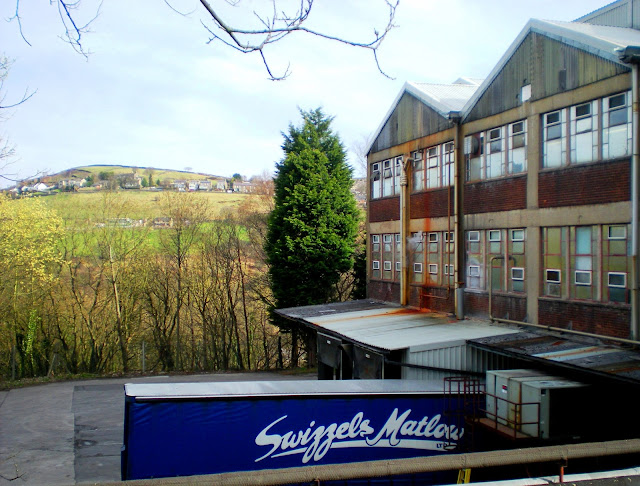 The Swizzells Matlow factory at New Mills, which is just over the Cheshire border and into Derbyshire. I wish you could press an aroma button on the internet- the sight and the smell of the lovehearts chugging along the conveyor belt on a recent Sunday morning was overpowering, in a nice way.  S at ABC Wednesday. 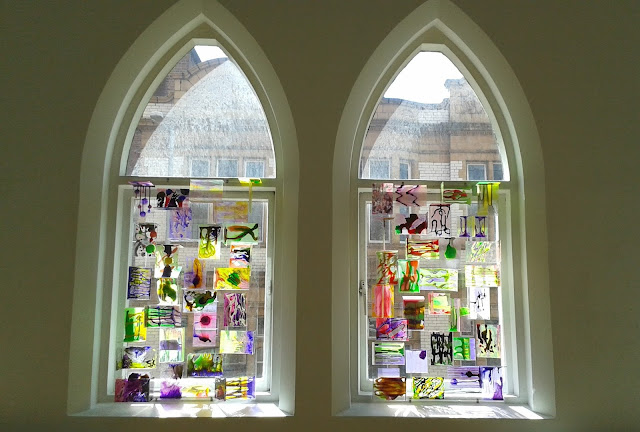 Interesting effects at the current exhibition at the Holden Gallery, a neo-Gothic building which is also an exhibition space for the Manchester School of Art. 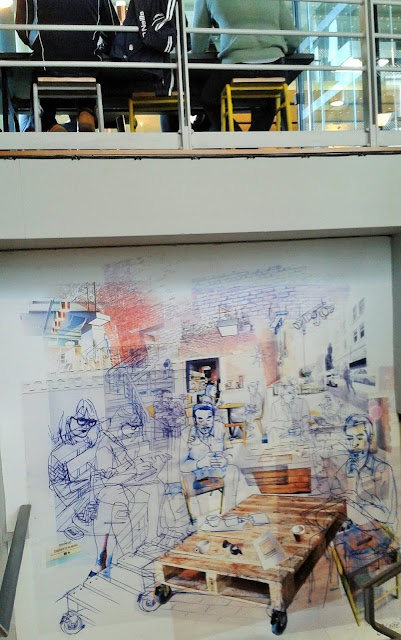 A nice mural by Cherie Jerrard from the Manchester School of Art (for this week’s Monday Mural meme) at Rise on Deansgate. It's one in a series of An Everyday Reportage from cafes and coffee houses across Europe.

A weekend that was much about having fun in the sun, as well as more serious stuff.
Interesting meeting on Friday night with two of the NW Labour MEPs and others involved in the north west UK and European anti-racist campaigns.

Supporting the Free Palestine and Parents Defending Education rallies in Piccadilly Gardens at lunch time then a sunny Saturday afternoon catching up with friends at Barca. Evening we saw the very good film Eye in the Sky (Aaron Paul, Helen Mirren)- scary stuff and moral dilemmas about drones and military.

Sunday included an amble along the River Irwell looking at greenery, giant hogweed and new buildings some of which were rather cool in design but with steep, unaffordable prices for the local population. 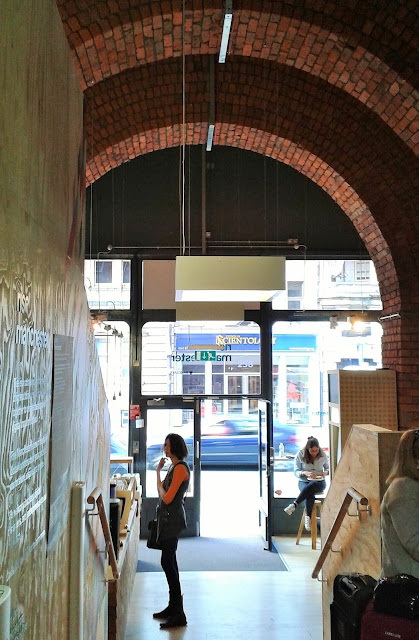 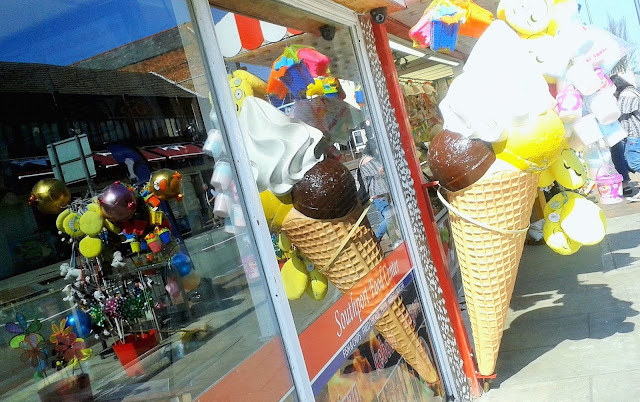 My freelance writing day was Thursday this past week but as it was so sunny, I put my pen and paper in my day pack and hopped onto the 0844 train at Manchester Victoria.  Northern Rail wove its way through lush green parts of Salford and Lancashire. By 1004 I was at the coast in a swelteringly hot Southport (22°C and rising).

More on that another day- it’s mostly an elegant 19th Century resort with some tasteful modern trappings, with beach, pier and a vintage amusement arcade. A coastal path takes you among reeds, river and sand, flutterbys, natterjack toads, bunnies and birds and much more.

Sefton Borough Council have done well to minimise Southport from being a typical chintzy British seaside town full of chips, candy floss and tack, but it’s there if you want it, as in this photo!