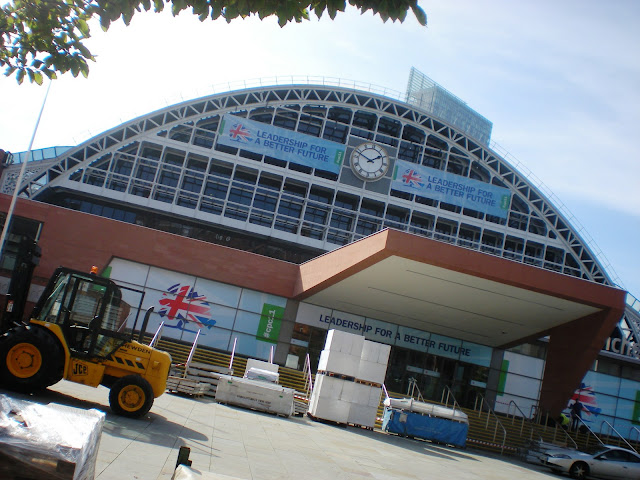 The mini heatwave in the UK this week has not curtailed preparations for the annual Conservative Party Conference, which takes place in Manchester from Sunday 2nd October to Wednesday 5th October. Workers are hard at it, in 25°C, constructing road blocks, gantries and assorted barricades to protect the government.
I remember being surrounded by police and security last time the Tories were here in 2009, when it was difficult to gain access to parts of the city centre, trams were not allowed to run in certain areas, and dozens of men in pinstriped suits quaffed gin and tonics in some of my favourite watering holes. In Beluga bar and restaurant many looked akin to Steve Bell cartoons from the 1980's yuppie age, only with smaller mobile phones: http://www.belltoons.co.uk/
Anyway, there is a demonstration against all the Conservative cuts that takes place in Albert Square on Sunday 2 October from 2.00 p.m: Take the Square is for all people opposed to the cuts: http://www.ukuncut.org.uk/actions/706
The Labour Party have also used this building for meetings. Now known as Manchester Central convention complex, it was formerly called GMEX (Greater Manchester Exhibition Centre) but once upon a time it was Manchester Central railway station, which sadly was closed in 1969.
Generally speaking a Tory blue is as rare a sight in Manchester as late September days reaching 26°C. Oh dear, that does not bode well...
Footnote: The Conservative Party emerged in 1834 out of the old Tory Party, which dates to 1678; it has always been colloquially called the 'Tory Party' or 'Tories'.
Posted by Chrissy Brand at 08:25