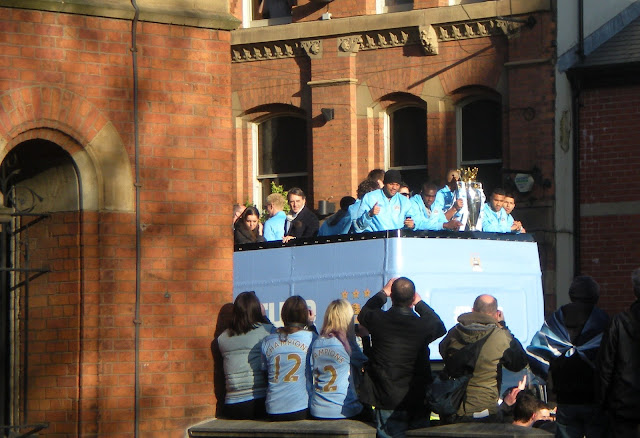 100,000 people lined the streets for Manchester City's victory parade yesterday evening. I restricted myself to taking about 10 photos from my vantage point behind the Bridgewater Hall. I chose this one for today's post as I liked what it represented: the combination of typical Mancunian red brick architecture, the loyal fans, and the team bus coming round the corner in the evening sun.  A better close up of the trophy and players is below.

The Citizens, or The Sky Blues, paraded through the city centre a day after narrowly winning the league for the first time since 1968. Their long suffering fans thought hope had vanished on Sunday when, with no minutes of normal playing time left, they were losing 2-1 to lowly west Londoners Queens Park Rangers.

The Premier League title was returning to Old Trafford, as Manchester Utd had just won their last game. But somehow the multicultural multi-millionaires of the world’s richest football club scored two goals in injury time to win 3-2 and take the league. And, in doing so, provided enough material to give the UK media networks licence for non-stop coverage for the next 24 hours.
Today's post is linked to the Our World Tuesday blog and, of course, the Midweek Blues MeMe. 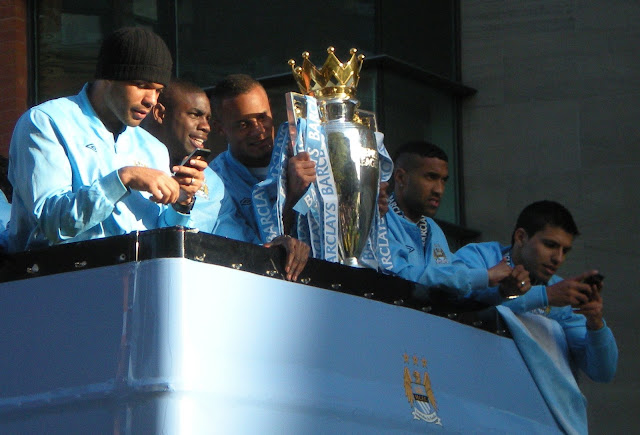