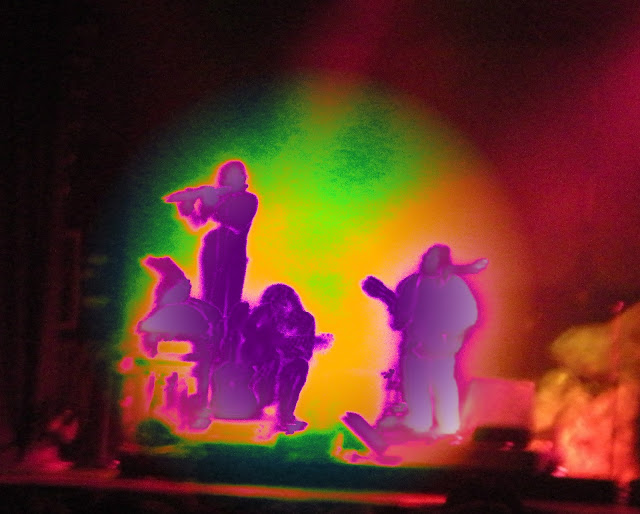 Treatment using FotoFlexer Heat Map (with thanks to Tim)

The Musical Box are a Canadian band who perform music from the Gabriel era of Genesis, with the band's blessing. Peter Gabriel himself has taken his children to their performances to show them what he used to sound and look like all those moons ago. The band use the orginal slide show too, and even physically resemble the classic Genesis line-up.

The Musical Box performed the double album Lamb Lies Down on Broadway at the Manchester Apollo on Thursday and I was completely enthralled. It's an album I would pick on Desert Island Discs (not that BBC Radio 4 would ever invite me onto that programme!)

If you don't know it, The Lamb is amazing tale of the toughness of urban life in the western world, an inner exploration of body and mind, the emotions we feel and the emotions we fear, and coping when life is out of our control. All set to some powerful and beautiful music and imagery. you can get a feel of this tour by The Musical Box on YouTube.

Genesis were using the term “multi-media” decades before it became fashionable. Their experimental use of props, lighting and slide shows might not always have worked, but The Lamb Lies Down on Broadway slide show did, and set to the wonderful music it’s a must-see 90 minutes. You really should set aside an evening to watch it all at Oquatanginwann’s YouTube channel .


"The rocks, in time, compress your blood to oil, your flesh to coal, enrich the soil, not everybody's goal.
Anyway, they say she comes on a pale horse, But I'm sure I hear a train.
O boy! I don't even feel no pain - I guess I must be driving myself insane. Damn it all!
Does earth plug a hole in heaven, Or heaven plug a hole in the earth?
How wonderful to be so profound, when everything you are is dying underground."

Linked to the Weekly Top Shot blog.
Posted by Chrissy Brand at 08:10