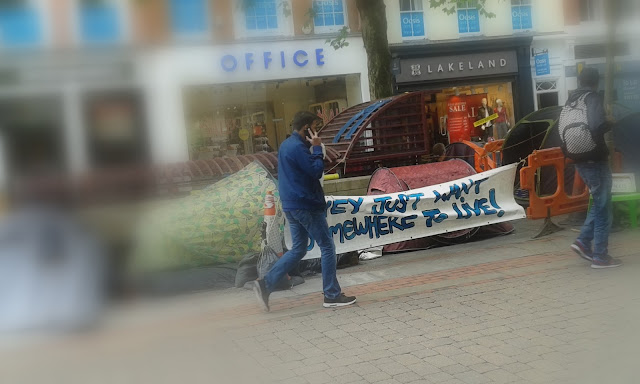 They just want somewhere to live!

Manchester City Council is trying to ban the Manchester Homeless Rights of Justice Camp from Manchester City Centre! The Camp is now facing one of its biggest challenges - the protesters could be banned from the city centre.

Solicitor Ben Taylor, who represents the homeless campaigners, has said that breaking the ban could lead to “being committed to serve a two-year prison sentence for doing nothing more than not having a home in which to sleep”. If the ban is allowed in Manchester, other councils could also follow suit, using the ruling as a precedent.

This morning, Tuesday 21 July, a judge will decide whether this ban goes forward.

There is an action planned to demonstrate to the judge and those involved that there is widespread support for the Homeless Rights of Justice Camp, and to highlight the ludicrousness of banning protesters and criminalising a messy social issue.

We will set up outside of Manchester County Court (by the People’s History Museum) with sleeping bags, hot drinks, pillows and placards, and show a peaceful physical presence to mirror the efforts made by the Homeless Camp protesters. The ruling it set to take place between 10am - 1pm, so the sleepover will start at 9.15 am until a result is announced.

Even if you can’t come for the whole thing, please come for as long as you can. Please bring a sleeping bag to bring the point home about sleep rough, and bring as much biscuits and tea and musical instruments you need to stay comfortable!

It’s a small effort to make in order to show crucial support at a key moment in this city’s democratic history. Will Manchester pursue the protesters with draconian, punitive legal measures? Or will this be a turning point for how this city deals with homelessness?