"When the snow lay round about... 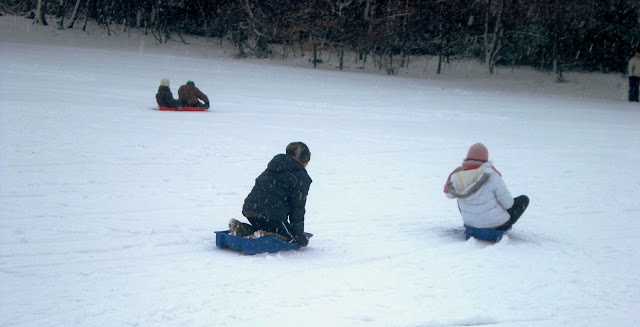 ...deep and crisp and even." Happy Boxing Day everyone!

We had a white Christmas here in the north-west last year (2010). Here is a view of Dunham golf course, bereft of golfers but with plenty of noise from tobogganists - led by pink-hatted Holly and followed closely by Tim, on their new, blue toboggans.


For non UK or British Commonwealth readers, Boxing Day (also St. Stephen's Day) is so called because it was the custom on that day for tradesmen to collect their Christmas boxes or gifts in return for good and reliable service throughout the year.

Stephen was a saint stoned to death shortly after Christ's crucifiction, as in the carol "Good King Wenceslas looked out, on the feast of Stephen". King Wenceslas himself was a 10th century Duke in Bohemia, part of the Czech Republic, hence King Wenceslas Square in Prague.

The traditional celebration of Boxing Day included giving money and gifts to charitable institutions. The holiday may date from the Middle Ages (5th to 15th centuries). It could have started with the aristocracy of England giving Christmas gifts in boxes to their servants on 26th December. Or it may have been through priests giving the contents of churches' alms boxes to the poor on the day after Christmas.
Posted by Chrissy Brand at 07:23