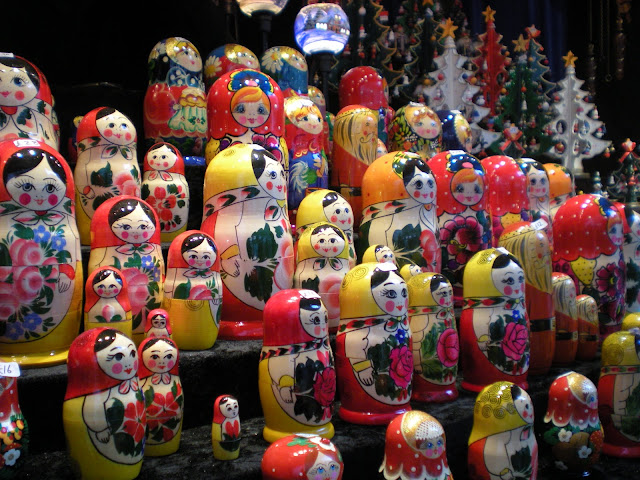 This stallholder travelled 1000km from the Black Forest in Bavaria, where Munich is the major city, to Manchester to sell its traditional Bavarian cuckoo clocks at the Christmas markets.
However, the stall is dominated by the wonderful Russian Matryoshka dolls. The first Matryoshka dolls were made in Moscow in 1890 and depict Russian peasant women in traditional dress.
With the Soviet dawn of perestroika in the 1980s dolls appeared depicting Soviet leaders from Gorbachev down to Lenin. These days you can also find versions of the Matryoshkas as fairy tale figures, sports players, The Simpsons and The Beatles. I am pleased to report that only the traditional Matryoshkas were on sale here.


There's a cute video of two of the Christmas markets at: http://www.youtube.com/watch?v=SustfvoRAVI It reminds me of an independent low budget romantic film, with the bashful young woman, the soundtrack and the angles of some of the shooting.
Posted by Chrissy Brand at 07:28