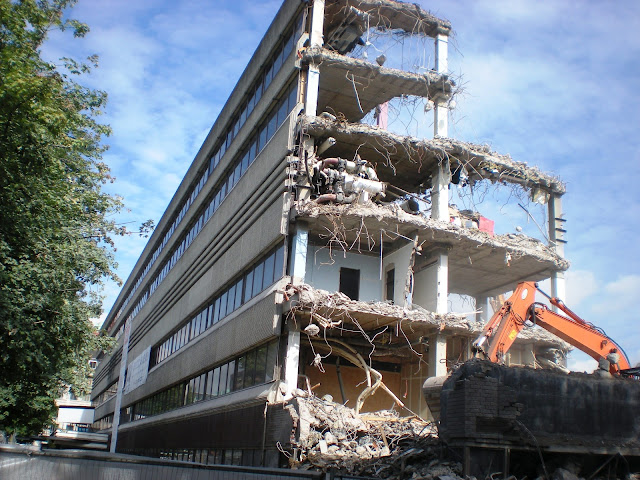 With the BBC all long since moved out to Media City, their former home of BBC New Broadcasting House on Oxford Road is being demolished. This brown and grey building going under the hammer (literally) was only completed in 1975 but is now being demolished, rather than reused - a dreadful waste.
In the 1980s my first BBC job was at the equipment department in west London. We used to send out stock (from capacitors to mixing desks) to engineers at all the BBC sites, from Ascension Island to Aberdeen. NBH was the code for New Broadcasting House in Manchester, home to BBC local radio and tv.  A few years later I was enjoying recordings of concerts and sitcoms here. I was last inside when we were on a fascinating tour of the building and its facilities during its latter days.

It was then sold for £10 million in 2011. A complex of hotel, shops, and apartments is due to be built here but of most interest to me is that there will also be a public space for broadcasts and exhibitions.
A lesson to be learned by namers of buildings everywhere is that what may be new at the time it is built, is not so new when it comes to demolition time, however many decades later.

Linked to the Our World Tuesday blog.
Posted by Chrissy Brand at 08:18