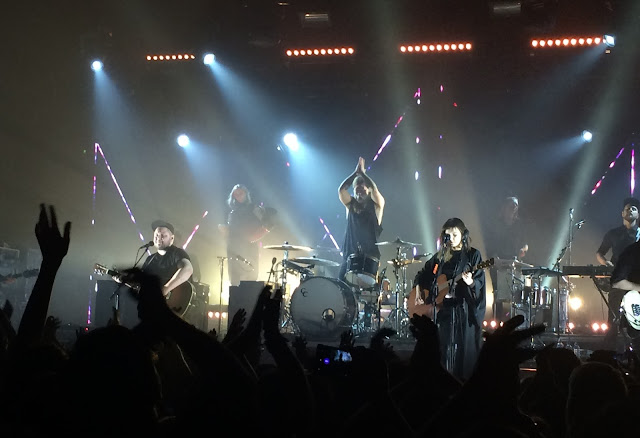 Highasakite are probably the best support act I have ever seen - and I first started gig-going in London back in the summer of punk (1977)! This five-piece Norwegian band have a mesmeric, haunting and original sound. A visually stunning line up on stage too, all in an equal row with a searchlight behind each of them.

Of Monsters and Men were wonderful too (although some of the chattering audience really wound me up. Why go to a gig if you are going to talk through it? This hasn't happened at any of the other 12 bands I have seen aroun Manchester in the past six weeks).The audio mix was a bit off at times too IMHO- the three lots of drums often drowned out Nanna's vocals and the four guitars.

Overall they still sounded great though - such energy, amazing sounds of brass, accordian and keyboards creating a unique sound of indie-folk and sagas of Icelandic life. Most of the fantastic tracks from their two albums were played but please play my fave track Yellow Light next time! Earlier this week in the Guardian there was a good article on why modern Icelandic music sounds as it does.