Idiot at the Palace... 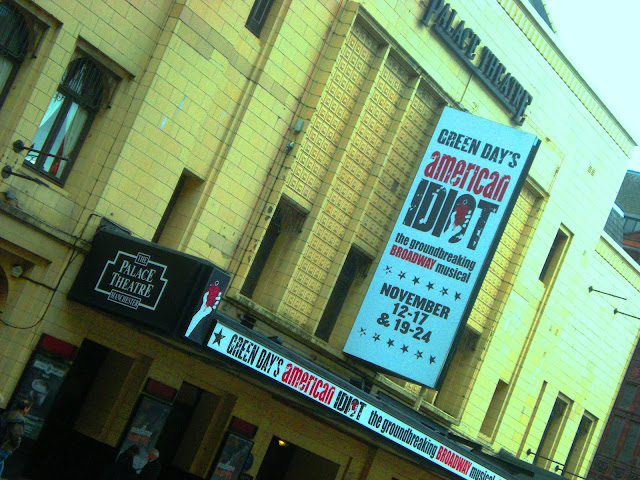 Until I saw this sign at the Palace Theatre I had no idea that Green Day's excellent American Idiot concept album was being performed as a musical. Sounds interesting. The title track lays into the USA of 2004, with lines referencing the danger of the "new, biased media." It's now on at the Palace Theatre, running from 12th to 17th and 19th to 24th November.

After a run of tame musicals it is good to see quality and thought provoking performance at the Palace Theatre again. The theatre was originally known as The Grand Old Lady of Oxford Street and opened on 18 May 1891. The opening presentation, to a capacity audience, was the ballet Cleopatra.  Sadly the theatre then had to go down a more commercial route to meet costs. During the early part of the 20th century it came into its own, with artists such as Danny Kaye, Gracie Fields, Charles Laughton, Judy Garland, Noël Coward and Laurel and Hardy making appearances.

In September 1940 the theatre took a direct hit from a German bomb. In the 1970s audience numbers declined, as they did in many live venues, and it was threatened with closure. The Arts Council supported it in the 1980s, and after major internal refurbishment and an enlarged stage facility, it was run by a charitable trust, Norwest Holdings.

It is now one of the best equipped and popular theatres outside London. In its repertoire it hosts major touring musicals often with major celebrities and performances of opera and ballet along with various other comedy acts and one night concerts.

With thanks to Wikipedia for some of the above information ;-)
Posted by Chrissy Brand at 10:24