Make mine a double (century) 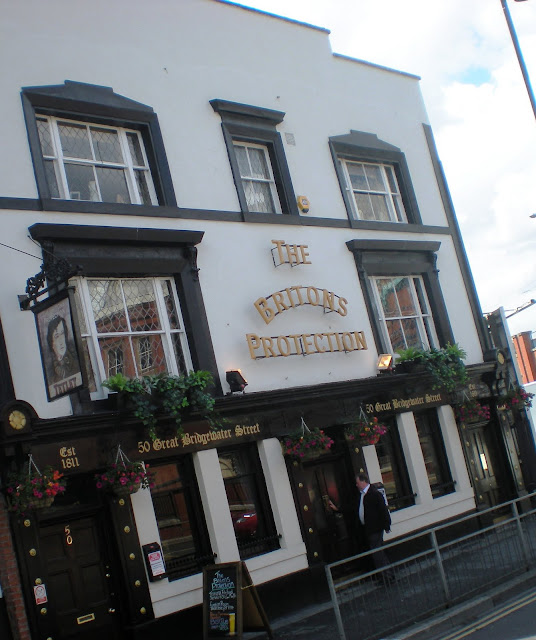 The Briton's Protection pub celebrates 200 years this weekend. It is a traditional looking British pub both inside and out, although it appears a lot roomier on the inside than you might imagine. They are putting on some special offers including beer at 10p a pint for the first 200 people to arrive on Friday and Saturday (the current cost of a pint would be about £2.50 I think, but not sure as I don't drink them!)
My favourite part is their inside mural of the Peterloo Massacre - the 1819 protest for parliamentary reform which took place just outside the Briton's front door, in which 15 demonstrators were killed and 700 injured by the sabre-wielding cavalry who charged the 80,000 strong crowd. I will post more on this on the 16 August anniversary.
"Step through the tiny doors of The Briton's Protection and you can see why it's been voted 'The Best Pub in Manchester' at The Pride Of Manchester Awards for two years on a trot. The tardis like interior oozes Manchester's history - you can imagine Henry Hunt and his supporters sipping their last ale or two in here back on that hot August day in 1819, before they were brutally killed outside by the King's Hussars. If you really want a taste of Manchester... The Briton's Protection should be your first call!" ~ http://www.manchesterbars.com/ (Aug 2010)
Posted by Chrissy Brand at 06:02