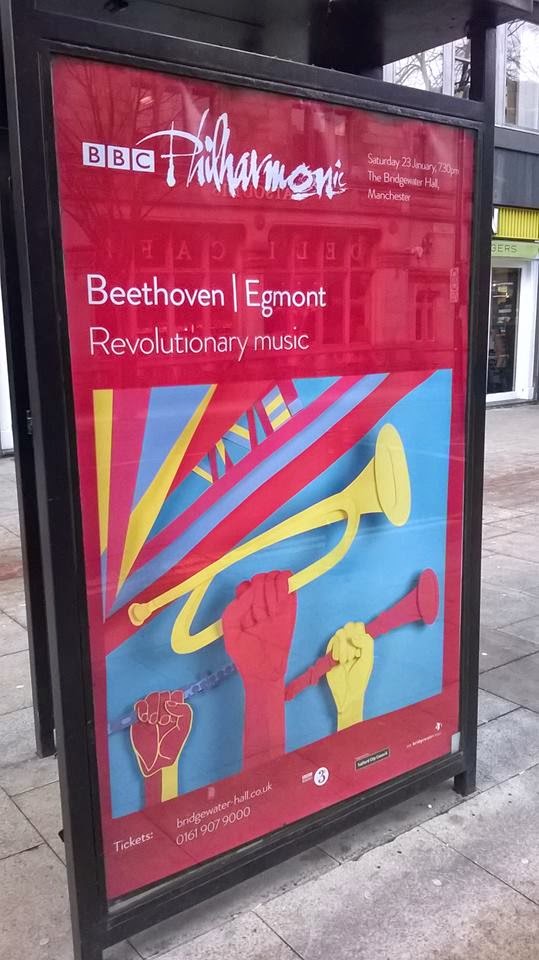 Billed as "Revolutionary Music", I have liked these graphics for the two BBC Philharmonic concerts of 23 Jan and 7 Feb ever since I picked up a flyer last autumn. It may not be a conventional entry to Monday Mural but it captures that same street art ethos I feel.

7 Feb is Schoenberg's Pelleas und Melisande, Op 5 and Beethoven's Concerto for Piano No. 5 in E flat major 'Emperor', Op 73. Played by the BBC Philharmonic with Juanjo Mena conducting and Hannes Minnaar on piano.

It's about the only time the BBC ever does anything revolutionary! With its news, politics and business coverage it is conservative with a small and a capital "C", as reports have proven yet again this past week (as mentioned at George Monbiot's blog), from which I quote below.

"The BBC’s business reporting breaks its editorial guidelines every day, by failing to provide alternative viewpoints. Every weekday morning, the [Radio 4] Today programme grovels to business leaders for 10 minutes. It might occasionally challenge them on the value or viability of their companies, but hardly ever on their ethics. Corporate critics are shut out of its business coverage – and almost all the rest. On BBC News at Six, the Cardiff researchers found, business representatives outnumbered trade union representatives by 19 to one. 'The BBC tends to reproduce a Conservative, Eurosceptic, pro-business version of the world'. This, remember, is where people turn when they don’t trust the corporate press."

"Another study reveals a near total collapse of environmental coverage on ITV and BBC news: it declined from 2.5% (ITV) and 1.6% (BBC) of total airtime in 2007 to 0.2% and 0.3% in 2014(14). There were as many news stories on these outlets about Madeline McCann in 2014 – seven years after her disappearance – as there were about all environmental issues put together."

So much for an impartial public broadcasting service...if only some of their music coverage matched their news coverage.