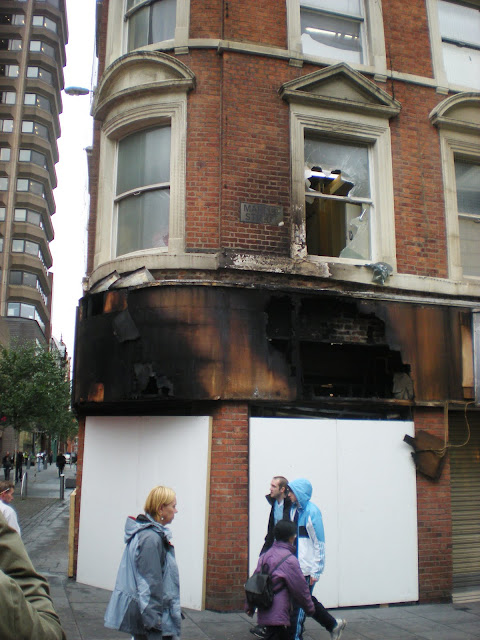 The Miss Selfridge store on Market Street was set alight during the riot on Tuesday evening. This is how it looks in the cold light of day.  The perpetrator has been caught and arrested.  See the frankly astonishing ITV news video at:  http://www.itv.com/news/riots-fire-suspect31291/

With some notable exceptions such as this, it has been a return to business as much as possible all across the city, although many stores, restaurants and offices are still are closing early, just in case of more riots. However many small independent businesses are badly affected and their short and long term futures could hang in the balance.
To reiterate for some international readers, as I have heard of misunderstandings on the international media reporting, these riots are nothing to do with the UK government cuts (unlike the mainly peaceful student and public sector demonstrations). The police shot dead an armed man in north London a week ago which led to a a peaceful demonstration, which was then hi-jacked and became a riot there. Copycat riots have spread through the country (just in England but not the rest of the UK- Wales, Scotland and Northern Ireland are thankfully unaffected so far). Most rioters and looters are not expressing a political agenda, but just a desire to cause damage and steal consumer items.
This BBC interactive map is useful: http://www.bbc.co.uk/news/uk-14436499
Posted by Chrissy Brand at 11:54